You can find everything about Raymond van Barneveld here, from the latest news to the story of his success.

Walk on music: Eye of the Tiger – Survivor

Raymond van Barneveld need not apply for the label ‘legend’. Over a glittering, success-laden career, the Dutchman has sealed his spot among the greatest players ever to pick up a dart.

While his career didn’t have a storybook ending, the tale of a postman from the Netherlands who became a pioneer is among the best feel-good stories in sport.

It didn’t take long for a young Van Barneveld to make himself known on the darts scene. After a number of successes in his native Netherlands and beyond, a 23-year-old Barney made his World Championship debut in 1991. His Lakeside visit ended early – as did return trips in 1993 and 1994. But in 1995, he stormed his way to the final, where he lost to Richie Burnett. In the same year, Van Barneveld made the Finder Darts Masters (then known as the Dutch Grand Masters) his first major title.

But, just as Rocky Balboa had a second go at Apollo Creed, Van Barneveld would mount his own tilt at redemption to the strains of ‘Eye of the Tiger’. Three years after his maiden World Championship final, the Dutch star returned and downed Burnett 6-5 in an all-time classic showdown.

From that point, the floodgates opened. Three more world titles would follow on, the first of that trio coming a year after the classic defeat of Burnett. After another tight final, culminating in success against Ronnie Baxter, Van Barneveld became the second man to successfully defend the crown – after Eric Bristow.

In 2003 and 2005, he added numbers three and four. The former was sealed with a win against surprise finalist Ritchie Davies (who’d won just one match in six previous Lakeside visits. In his penultimate visit to Frimley Green, Barney thrashed Martin Adams 6-2.

His last trip to Surrey ended at the last hurdle, but for the first time since 1995, Van Barneveld had to settle for runner-up. Despite being the clear favourite, he was stunned by Jelle Klaasen, who became the youngest ever world champion.

Another attempt to rule the BDO roost wouldn’t come – a bigger challenge lay ahead.

In 1999, then defending double world champion Van Barneveld took on PDC top dog Phil Taylor in a momentous exhibition clash at the Wembley Conference Centre. Taylor claimed a 21-10 win that became the catalyst for one of darts’ great rivalries. Seven years later, Van Barneveld knew it was time to join Taylor and his ilk.

Van Barneveld switched to the PDC to great fanfare; there was intrigue as to whether the BDO behemoth would rise to the top of a more competitive organisation. All questions were answered in a whirlwind first year, in which he stormed up the rankings and made history in a way that wouldn’t be repeated until Glen Durrant’s debut campaign.

He was parachuted into the Premier League Darts, and promptly secured the tournament’s first ever nine-dart finish. He’d go on to nail four more perfect televised legs: against Jelle Klaasen, Brendan Dolan, Terry Jenkins and Denis Ovens, all within the space of 18 months between January 2009 and July 2010.

A first PDC major swiftly arrived in the form of the UK Open. By the time the 2007 PDC World Championship rolled around, he was the 32nd seed. It meant that, after breezing past 16-year-old Mitchell Clegg, top seed Colin Lloyd stood in his way. Van Barneveld dispatched the frontrunner 4-3, and followed it up by overcoming Rico Vonck, Alan Tabern and Andy Jenkins without dropping a leg.

The final would go down in folklore. The 100 averages, Taylor’s red-hot start, the Barney comeback, the bull-off and that sudden death leg all led up to the dart at tops that would end Taylor’s three-year winning streak and immortalise the name Raymond van Barneveld.

It was his fifth title – nobody at the time would have believed that it’d be his last.

He would defend his UK Open title, but the expected slew of titles didn’t materialise. Illness curtailed his 2008 campaign, though he still reached the World Championship final again in January 2009. This time, Taylor would have his revenge, prevailing 7-1.

Personal problems were coming between Van Barneveld and success. A battle with diabetes knocked his confidence, as did reports of blackmail in 2010 (a year in which he managed to reach the World Matchplay final).

2012 was a mixed bag, starting in the worst possible way – with a shock 3-0 defeat to James Richardson at the World Championship. He bounced back in style, breaking his televised average record twice and winning the Grand Slam of Darts, along with a first European event.

Excluding the World Cup of Darts (which he won four times; once with Co Stompe, and three times with Michael van Gerwen), Van Barneveld would win just one more TV title. The 2014 Premier League Darts looked like a straight shootout between the previous two winners, Michael van Gerwen and Phil Taylor.

Yet, thanks to a 12-game unbeaten run in the middle of the season, Barney fought his way to second place. In the semi-finals at the O2 Arena, he finally secured a first Premier League Darts win over Taylor. In the final, he denied Van Gerwen a title defence, seeing out a 10-6 win to roll back the years.

Van Barneveld’s twilight years were, by his own admission, bittersweet. His struggles with both mental illness and diabetes held him back, while there were alarming flashes of petulance in games against the likes of Taylor and Mervyn King.

There were still flashes of the old Barney, particularly at the 2017 World Championship, where he followed wins over Adrian Lewis and Taylor with a semi-final bout with Van Gerwen that would produce the best winning average (Van Gerwen’s 114.05) and best losing average (Van Barneveld’s 109.34) respectively. A shock win over his Dutch compatriot the year before will also live long in the memory.

His last TV singles final to date would come at the 2018 Masters, with Van Gerwen coming out on top. The pair would combine to win the World Cup that summer. Barney’s last event final came at Players Championship 8, in 2019. A storied career would temporarily end in tears; first in a Premier League farewell in Rotterdam, and then in a World Championship defeat to Darin Young in December 2019.

However he announced his comeback in September 2020, before making his appearance during the Q-School in 2021. He secured his PDC Tour Card on the final day of the event in Niedernhausen as he finished third on the European Q-School Order of Merit.

He won a title at the third time of asking on his return to the ProTour but endured a dismal time barring that until 2022 when he reached the semi-finals of the Grand Slam rolling back the years. Before being whitewashed by Gerwyn Price in the third round at the recent World Championship who he beat twice at the Grand Slam.

But for Van Barneveld, he garnered the attention of the darting world again returning to the World Series also in Bahrain in early 2023.

A mild-mannered postman, Van Barneveld wasn’t a born superstar. Thanks to his prolific success on the oche, the Dutchman became a household name.

While many players have earned popularity, few have accrued a dedicated following as Barney has.

The ‘Barney Army’, resplendent in orange, can be found at every PDC tournament. His global appeal meant that Van Barneveld could depend on staunch support everywhere he went – but particularly in his native Netherlands.

Trips to Rotterdam for the Premier League Darts produced some hair-raising moments. Darts fans everywhere will identify Survivor’s hit ‘Eye of the Tiger’, not with the Rocky franchise, but with Van Barneveld.

While he wasn’t the first Dutchman to appear in top darting events, his rise to prominence electrified the darts scene in Van Barneveld’s home country. Now the likes of Michael van Gerwen, Vincent van der Voort, Jeffrey de Zwaan, Danny Noppert and Ron Meulenkamp are among a strong Netherlands contingent who grew up as fans.

Outside of darts, he even teamed up with Dutch rapper Donnie to release 180 Linkerbaan in 2017.

Read all the latest news about Raymond van Barneveld 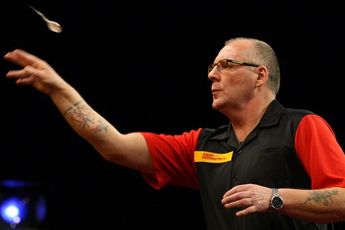 Danish darter Jann Hoffmann passes away: ''You were a credit to our sport"

Jann Hoffmann died on Monday at the age of 65. The Danish darter enjoyed his greatest successes in the 1990s.He competed in t... 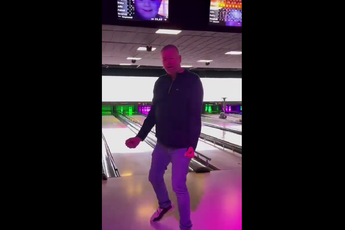 VIDEO: Van Barneveld also appears to have a talent for bowling and shows a delightful strike

For several decades, Raymond van Barneveld has been known as one of the best darts players ever. But 'Barney' also appears to... 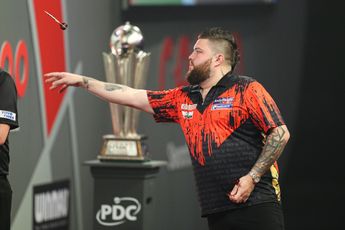 Stay fully informed about the latest events of the 2023 Bahrain Darts Masters in our tournament centre. Here you will find th... 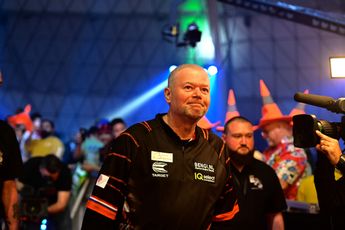 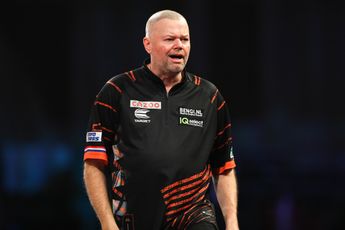 Raymond van Barneveld and Jonny Clayton have completed the line-up for tomorrow's Quarter-Finals at the Bahrain Darts Masters... 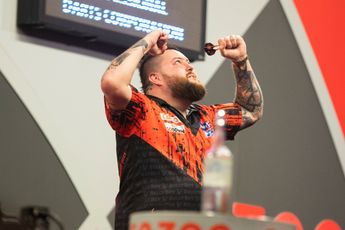 From 2023 onwards, the World Series of Darts kicks off its tour in January with little rest for the top darting stars as the... 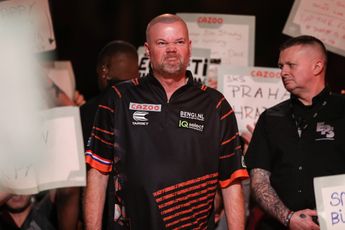 Van Barneveld 'dreaming' of Premier League Darts return: "Maybe not this year, but the year after"

The first World Series tournament of the year will be played on Thursday and Friday with the Bahrain Darts Masters. Raymond v... 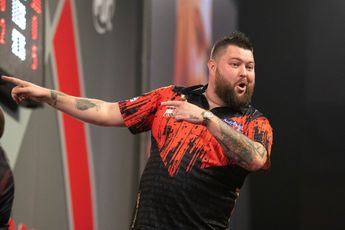 The PDC has released the draw and schedule for the 2023 Bahrain Darts Masters. Michael Smith will take on local star Abdulnas... 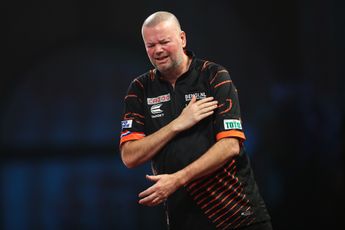 Van Barneveld was left shocked by heavy Price defeat: "I had started the World Championship with high expectations"

For Raymond van Barneveld, the past PDC World Championship ended in disappointment. The former world champion went down 4-0 a... 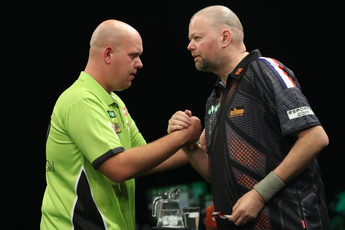 Michael van Gerwen will play Chris Dobey in the quarter-finals of the World Darts Championship on Sunday night. It is the nin...