Everything about Michael van Gerwen can be found here. From the latest darts news to all his achievements!

Michael van Gerwen is the current PDC world number two, the winner of three world titles and over fifty television titles. Mighty Mike is the most successful darts player of all time after Phil Taylor.

Van Gerwen won his first major title in 2006 at the Winmau World Masters beating Martin Adams in the final. MvG became the youngest ever World Masters champion at the age of just 17. A few months later, he made his debut at the Lakeside during the 2007 BDO World Championship, in which, Van Gerwen was made the tournament favourite but lost 3-2 to Gary Robson in the first round.

Switch to the PDC

Van Gerwen announced his move to the Professional Darts Corporation (PDC) together with, amongst others, Vincent van der Voort following the 2007 BDO World Championship final. By this point MvG had already secured his first PDC title, winning the 2006 Holland Open in Schiedam. Following his switch Van Gerwen made it back to back wins by retaining the title in 2007, on both occasions MvG proved too strong for Colin Osbourne. It was at the 2007 UK Open that Van Gerwen made his PDC debut, this time Osbourne got the better of the Dutchman in round one. A few months earlier, MVG had issued a statement of intent during the Masters of Darts by throwing a nine-darter against fellow countryman Raymond van Barneveld.

In 2007 MvG qualified for his first PDC World Championship, only 18 at the time,Mighty Mike, missed a match dart against Phil Taylor during their first-round contest. It was to be the first of many major PDC clashes between the two. It wasn’t until April 2009 before Van Gerwen won his third PDC title, winning the Players Championship in Taunton, defeating fellow Dutchman van der Voort in the final.

Towards the top of the world

During 2010 and 2011 Van Gerwen stepped away from the main tour, a loss of confidence during his early days in the PDC had impacted his game. Van Gerwen took refuge on the PDC’s youth circuit, where he won four tournaments during 2011. In 2012 Van Gerwen was back on the main tour and his confidence was seemingly high, although he had lost three games that season 6-5 and had match darts in all three matches, Van Gerwen went onto win the second UK Open qualifier and a further six Players Championship tournaments that year.Mighty Mikewas also beginning to make progress on the big TV stage, during the 2012 World Matchplay the Dutchman threw a nine-dart finish against Steve Beaton

Van Gerwen gained revenge on Taylor at the 2013 Premier League Darts final; MvG took out a 132-bull finish to claim the prize, averaging 103.29 on the way to victory, in his debut season in the competition. Later that same year Van Gerwen beat Taylor, yet again, as he won the Players Championship. Van Gerwen rounded off the year by claiming his first PDC World Championship; MvG beat Peter Wright 7-4 in the final and with it became world number one, overtaking Phil Taylor for the coveted spot. Mighty Mike has held this position till January 2021.

In 2014 Van Gerwen won the World Grand Prix and the European Championship in 2015 and 2016,Mighty Mikemissed out on the world title in both years, but he did grab most of the other major titles. Out of the 23 majors on offer over these two years MvG won no fewer than sixteen, including UK Open twice, World Matchplay, Grand Slam of Darts and Players Championship Finals. Van Gerwen started 2017 in the best possible way, as World Champion after beating Gary Anderson (7-3) in the final. A third world title followed in 2019 after a victory over Michael Smith (7-3). That same year, Mighty Mike completed his "Career Slam" by winning the Champions League of Darts. That was the only missing television title on his record.

Van Gerwen reached his fifth PDC world final in 2020 but a fourth win in the competition failed materialise. Peter Wright finally beat Van Gerwen in a major final, at the twelfth time of asking. The following day MvG announced he had a new darts supplier as a three-year deal with Winmau had been agreed. It did not take long for Van Gerwen and his new darts to win another PDC major title, in March 2020 the Dutchman won the UK Open, his first UK since 2016. Van Gerwen had to overturn a 5-1 deficit to eventually overcome a stubborn Gerwyn Price 11-9.

The rest of the year was less successful. Van Gerwen only reached the final of a major tournament during the Players Championship Finals and only narrowly won that tournament by beating Mervyn King 11-10. At the World Championship, Mighty Mike surprisingly lost 5-0 to Dave Chisnall in the Quarter-Finals. Following this event he lost the world-number-one position to Gerwyn Price after holding this position for seven years.

Also 2021 was not a good year for the Dutchman. Van Gerwen only won the Nordic Darts Masters and a floor tournament. The World Darts Championship 2022 turned out to be a deception because of a corona infection. Mighty Mike had to withdraw for his third round match against Chris Dobey. After the World Championships Van Gerwen is in third place in the world rankings, well behind rivals Gerwyn Price and Peter Wright.

How much does Van Gerwen earn?

Since taking the number-one position on the PDC Order of Merit in January 2014, Michael van Gerwen has consistently been above £ 1.5 million in the two-year PDC world rankings. However, not all tournaments count towards the PDC Order of Merit, including the Premier League Darts for example, Van Gerwen has earned £1.1 million in prize money with his five Premier League titles.

As the number one in the world MvG is also popular for exhibitions and private bookings. In addition, sponsors and merchandise also pay to advertise their products with the top players; Van Gerwen currently has sponsorship contracts with Winmau Darts, MachineSeeker, TruckScout24 and KeukenConcurrent. Van Gerwen products are also available for purchase; a replica of his match shirt sells for around 50 euros, sets of Michael van Gerwen darts have been released, as well as darts cases, dart boards, surrounds and other merchandise items.

In August 2014, Van Gerwen tied the knot with his girlfriend Daphne Govers. Together they had their first child, daughter Zoë,in August 2017. On April 1, 2020, son Mike was born. In late April 2018, it was announced that Michael van Gerwen was appointed ridder in de Orde van Oranje-Nassau (Dutch version of MBE). This award is given to people who have made a special contribution to society.

Read all the latest news about Michael van Gerwen 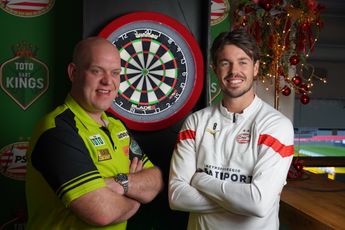 VIDEO: 'MvG & MvG' play a leg of darts in the Philips Stadion

Michael van Gerwen was at the Philips Stadion this week for a darts match where he played with fans against some players from... 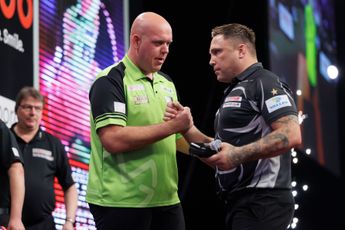 Price sees Van Gerwen as the 'one to beat' at PDC World Darts Championship: "He is the top form player at the moment"

For many, Michael van Gerwen and Gerwyn Price are the favorites for this year's PDC World Darts Championship and for the latt... 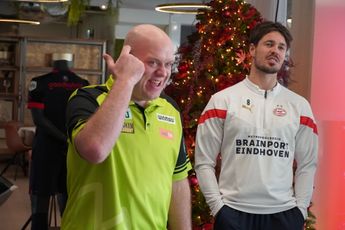 Van Gerwen takes on players and supporters of PSV: "He beat us with one dart too"

Michael van Gerwen was a guest of his favorite football club PSV on Wednesday afternoon. Together with some darts fans, the 3... 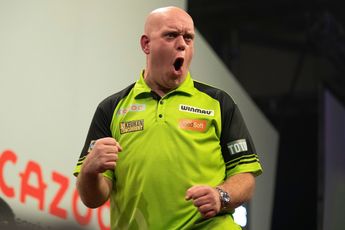 Van Gerwen confident of finally sealing fourth World title: "They know if I play my A-game, I am the best"

Michael van Gerwen is still without a fourth World title which he has been chasing for some time but after a downturn of form... 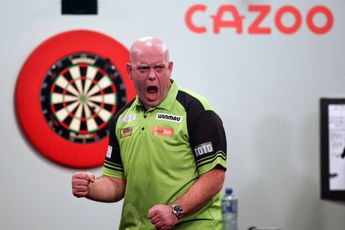 Van Gerwen shows no extra urge to prove himself ahead of PDC World Darts Championship: “Always want to show what I can do, that is no different now”

It has been ten years since Michael van Gerwen reached his first World Darts Championship final. At the time, he lost to dart... 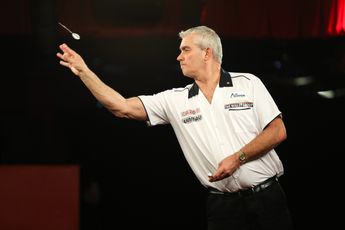 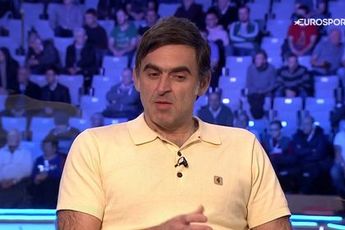 Ronnie O'Sullivan while on the punditry team for the recent Home Nations tournament in snooker was asked the age-old debate a...

Striking statistic: Only an average of over 100 has defeated Van Gerwen at PDC World Darts Championship 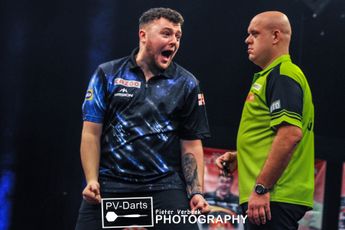 Van Gerwen sends warning to Rock amid darting hype: "He's not been on the tour for long and he doesn't have any scars yet"

Michael van Gerwen has warned Josh Rock not to get too carried away amid the current hype surrounding the Northern Irishman h... 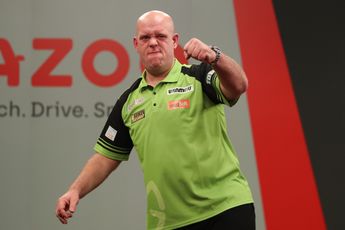 Michael van Gerwen has the highest average to his name with all PDC tournaments counted in 2022. Over his 149 matches, the Du...